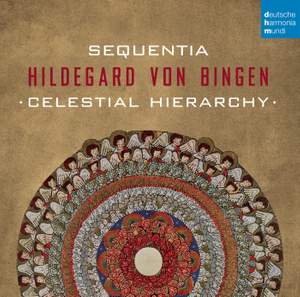 her melodic lines hover, dip and glide like some supernaturally graceful bird, and those vertiginous swoops in pitch, executed to perfection by the seven-voice female choir, never fail to thrill. — BBC Music Magazine, September 2013, 5 out of 5 stars More…

Since the early 1980s, the ensemble Sequentia’s name has been closely linked with the music of Hildegard von Bingen, the visionary abbess whose musical compositions are among the most astonishing and unique creations from the dynamic milieu of 12th-century Benedictine monasticism.

For this recording, a multi-generational ensemble of seven women’s voices has been assembled, together with the flautist Norbert Rodenkirchen and Bagby playing harp.

Sequentia is one of the world’s most respected and innovative ensembles for medieval music. It is an international group of singers and instrumentalists – united in Paris under the direction of the legendary performer and teacher Benjamin Bagby – dedicated to the performance and recording of Western European music from the period before 1300.

Based on meticulous and original research, intensive rehearsal and long gestation, Sequentia’s virtuosic performances are compelling, surprising in their immediacy, and strike the listener with a timeless emotional connection to our own past musical cultures.

Founded by Benjamin Bagby and the late Barbara Thornton, Sequentia can look back on 35 years of international concert tours, performing throughout Europe, North and South America, India, the Middle East, Asia, Africa and Australia.

Sequentia has brought to life over seventy innovative concert programmes that encompass the entire spectrum of medieval music, in addition to the creation of music-theater projects such as Hildegard von Bingen’s Ordo Virtutum, the Cividale Planctus Marie, the Bordesholmer Marienklage, and Heinrich von Meissen’s Frauenleich (several of which were filmed for television).

Sequentia’s comprehensive discography of more than thirty recordings spans the entire Middle Ages. In 1981, the ensemble began to release the first of many LP's and CD's which encompass the entire spectrum of medieval musical practice.

Many of these recordings – including the complete works of Hildegard von Bingen (7 CDs) have received awards: the Deutsche Schallplattenpreis (for Vox Iberica, 1993), two Netherlands Edison Awards (for Hildegard von Bingen recordings, 1987 and 1998), a French Disque d'Or (1996), the CHOC of Le Monde de la Musique (2002) and Diapason d'Or (1995 and 1999). Sequentia's best-selling CD, Canticles of Ecstasy, has sold more than 500.000 copies worldwide and was nominated for a Grammy Award as best choral recording. Recordings made by Sequentia have been integrated into the soundtracks of several major films.

her melodic lines hover, dip and glide like some supernaturally graceful bird, and those vertiginous swoops in pitch, executed to perfection by the seven-voice female choir, never fail to thrill.

Bagby has assembled what is almost a roll call of Europe's finest singers for this kind of music and has managed to create a miraculously coherent monophonic choir...This is all quality music-making.