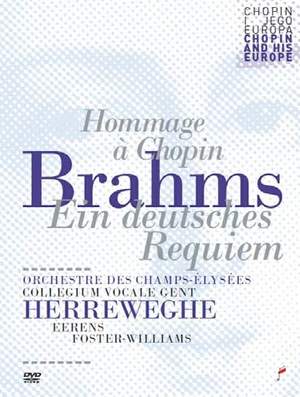 The visual impression of grandeur mixed with intimacy is entirely appropriate for the music...Herreweghe conducts with an almost priestly mien at times, though his tempos are generally a bit... — BBC Music Magazine, July 2013, 3 out of 5 stars More…

The first disc in the series is a recording of a solemn mass celebrated on 17 October 2010 at the Basilica of the Holy Cross in Warsaw, where traditionally on the anniversary of Fryderyk Chopin’s death, in front of his heart, a recreated funeral service is combined with Mozart’s Requiem, which in accordance with the composer’s wishes was performed at his funeral in Paris. During Chopin Year, this event gained a special dimension: the Requiem was treated to a masterful rendition by the Orchestre des Champs-Élysées, the Collegium Vocale Gent and Accademia Chigiana Siena choirs, and the soloists Christina Landshamer, Ingeborg Danz, Robert Getchell and Matthew Brook, under the direction of Philippe Herreweghe, recorded for the first time ever in its liturgical version, and in its original period sound.

Produced in HD film technology, preserving the highest possible sound quality, it conveys in a sophisticated way the unique atmosphere of both the ceremony and the venue.

This release also inaugurates the cycle ‘Romantic Requiem’, comprising recordings of funeral masses by nineteenth century composers to be performed in front of Chopin’s heart at Warsaw’s Holy Cross Basilica. The Institute will shortly be issuing Johannes Brahms’s Ein deutsches Requiem, also under the baton of Philippe Herreweghe.

The visual impression of grandeur mixed with intimacy is entirely appropriate for the music...Herreweghe conducts with an almost priestly mien at times, though his tempos are generally a bit on the fast side.

The soloists are excellent. Andrew Foster-Williams is solemn and authoritative...[Eerens] floats 'Ihr habt nun Traurigkeit' with a reassuring confidence...As for the filming, it's a model of its kind.