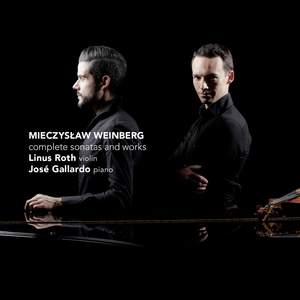 Linus Roth and Jose Gallardo show themselves to be ardent and adept exponents. In between, Weinberg's ascent to mastery can clearly be followed...if you want all of Weinberg's violin-and-piano... — Gramophone Magazine, September 2013 More…

On this 3CD set noted German violinist Linus Roth and the Argentinean piano virtuoso José Gallardo become the first pairing to perform a complete anthology of Mieczyslav Weinberg’s music for violin and piano. Weinberg had an unbelievably tragic life, full of struggle and pain. As a Polish Jewish composer during the 2nd World war he fled from the Nazi’s to Russia, got imprisoned by Stalin and was saved at the last minute by his good friend and colleague Dmitri Shostakovich.

The music of the 20th century Polish composer Mieczyslav Weinberg's is characterised by its depth of emotional content. As a Jew persecuted first by the Nazi’s, and later in Russia under the regime of Joseph Stalin, performance of his works was largely prohibited during his life. He is a great master of contrasts, and his compositions can move suddenly from the very dark, to the very bright, from shattering climaxes to a sound world that is barely audible.

In 1992 Linus Roth won First Prize at the German national competition "Jugend musiziert" and during his consequent studies he received support from Anne-Sophie Mutter and her foundation. In 2006 he received the Echo Klassik Award of the German Phonoacademy as "Best Newcomer" for his debut CD of sonatas by Brahms, Debussy, Ysaye and Mendelssohn on EMI Classics. Previous releases for Challenge Classics with pianist José Gallardo include recordings of music by Brahms (CC72382), and Schumann (CC72341).

Linus Roth and Jose Gallardo show themselves to be ardent and adept exponents. In between, Weinberg's ascent to mastery can clearly be followed...if you want all of Weinberg's violin-and-piano works now, here is a wonderful opportunity.