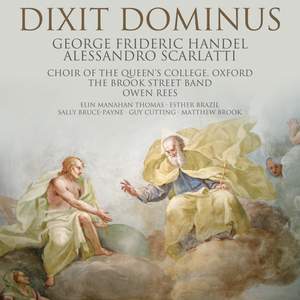 Scarlatti, A: Concerto No. 4 in G minor

The Brook Street Band join forces with the Choir of The Queen’s College, Oxford, and their director Owen Rees, for the first ever pairing on disc of the two settings of the Dixit Dominus by Alessandro Scarlatti and George Frideric Handel.

Following five critically-acclaimed and immensely popular recordings for AVIE, The Brook Street Band embark on their most ambitious project to date: a recording with the estimable student Choir of The Queen's College, Oxford, that pairs for the first time ever the two settings of the Dixit Dominus written by Alessandro Scarlatti and George Frideric Handel. Both works date from early 18th century Rome, Handel’s within a year of his arriving in the musical capital, and possibly influenced by Scarlatti's work, though the date of the elder Italian’s composition is not precisely known. Indeed it has been suggested that the 22-year-old Lutheran was attempting to outdo Scarlatti with his masterly grasp of large-scale sacred music for the Roman rite. In between these two grand Vespers, The Brook Street Band serve up a palate cleanser of an instrumental concerto in G minor by Scarlatti.

Rees's perceptive direction keeps the contrasting layers balanced and he has assembled a strong solo team- headed up by Elin Manahan Thomas and Matthew Brook - to complement the attentive playing of the Brook Street Band.

The bass aria [Dominus a dextris tuis] is one of the highlights, also because of the fine performance by Matthew Brook...One of the nicest parts is the duet 'De torrente' from Handel's setting, which is exquisitely sung by Elin Manahan Thomas and Esther Brazil.

Both works are performed with real spirit and elan, with Owen Rees drawing strongly projected, incisive work from his choir, particularly in homophonic passages.