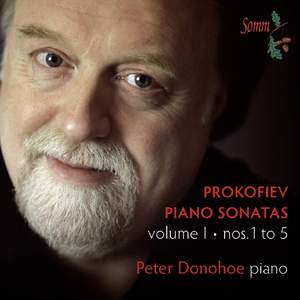 He makes a strong case for the single-movement first sonata...The second sonata’s acrobatics and wit are somewhat smothered, and the third’s tempestuous allegros sound relentless. It’s only in... — Financial Times, 27th July 2013, 3 out of 5 stars More…

Recording the complete Prokofiev Sonatas with pianist Peter Donohoe had been a long-cherished ambition of SOMM’s Owner and Recording Producer, Siva Oke, who had followed his illustrious career with keen interest for many years. This has now been realised with the complete recording of the Sonatas for SOMM, enjoyably recorded at Southampton University’s Turner Sims Concert Hall on their magnificent Steinway Grand, which Peter considers ideally responsive to the composer’s demands, both technically and musically.

Peter is no stranger to the Prokofiev Sonatas. He was asked by the publishers Boosey & Hawkes to prepare the definitive edition of the scores for them in 1985 and he also recorded Sonatas 6, 7 and 8 for EMI back in 1990. He has now added Sonatas 1 to 5 and 9 in this complete recording for the SOMM catalogue, for the first time.

He has, however, performed all the Sonatas in recital at some time or other over the years, and he feels – or with typical humility he thinks – that he has come as close to them as is possible for works of such infinite depth and stylistic complexity.

Peter has written the CD liner notes for this first volume as well as the rest of the cycle, in a relaxed, informed and affectionate manner.

He makes a strong case for the single-movement first sonata...The second sonata’s acrobatics and wit are somewhat smothered, and the third’s tempestuous allegros sound relentless. It’s only in the slow central movement of the fourth sonata and the fifth’s tranquil idioms that Donohoe allows Prokofiev space and shade

Donohoe’s unerring instincts for the shape and colour of these scores - their topography, if you will - is what sets him apart from all his rivals...Top-notch Prokofiev, commandingly played; this is as good as it gets.

Donohoe is an inescapable advocate of Prokofiev’s piano sonatas...No 5 opens with a memorable wiggle. He ensures that the slicing, acidulous felicity of Prokofiev’s writing is pure invigoration.

He's at his best in the welter of the fiercely compressed Third Sonata, and in his stark account of the much less well known Fourth, the first two movements of which plumb what are, for Prokofiev, rare emotional depths.