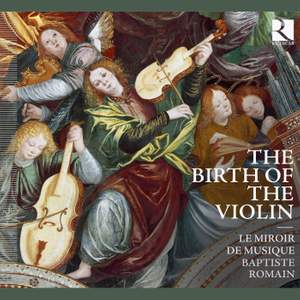 The Birth of the Violin

Smaller stringed instruments began to be developed during the first half of the 16th century, maturing little by little into the vyollon, a term first employed at the court of Savoy in 1523.

It was at this time that violins first began to appear in paintings, one of which is the fresco by Gaudenzio Ferrari that appears on the cover of this CD.

The works recorded here put this period into a clear musical context and provide a fine array of contrasting works for these first violins: on one hand, there are not only works from the Franco-Flemish school that had been flourishing in Italy since the middle of the 15th century, but also works from the pure Italian style that was in the process of being reborn. Motets, ricercars, counterpoints, madrigals and dances are all discovered anew and extend our knowledge of period instruments even further.

This, after all, is one of Ricercar’s principal aims. This recording introduces the Miroir de Musique, an ensemble of young players, the majority of whom studied at the Schola Cantorum Basiliensis. We are proud to present an exciting programme of works performed by musicians who are able to ally musicology with emotion.