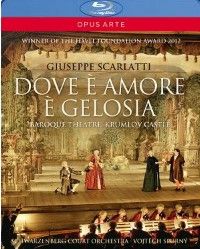 Rebellious servants, capricious lovers, cross-dressing farce and a happy ending: the fast paced action of this comic Baroque opera had all the ingredients to please the self-confessed ‘low-brow taste’ of an Austro-German prince, who commissioned Giuseppe Scarlatti for a piece to celebrate his son’s wedding. This is the opera’s first revival in modern times, and it takes place in the very same Baroque theatre, impeccably restored to its original glory, which hosted the first performance. With a cast of young singers drawn from Prague’s National Theatre and a stylish period-instrument ensemble, this vivid reconstruction will delight audiences as much today as it did the aristocratic guests at Ceský Krumlov in 1768.

Composer Giuseppe Scarlatti (1723-1777), was related to Alessandro and Domenico Scarlatti.

Comic opera performed in the Cesky Krumlov Theatre, where it was premiered in 1768.

‘WINNER OF THE HAVEL FOUNDATION AWARD 2012’ – the top artistic prize in the Czech Republic.

Extra feautures include: A Jewel of the Baroque - The story of the Castle Theatre in Ceský Krumlov.