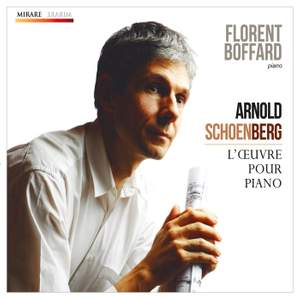 Arnold Schoenberg (1874-1951) wrote five volumes of piano pieces that match the key phases of his musical evolution: tonal, atonal, the tone-row, while maintaining a remarkable stylistic unity that influenced most 20th century composers.

Comes with a bonus DVD, 'Schoenberg, the misunderstood'. Florent Boffard studied with Yvonne Loriod, Geneviève Joy and Germaine Mounier and from 1988 to 1999, was soloist of the Ensemble InterContemporain, where he worked with several of today’s most prominent composers, including Boulez, Donatoni, Ligeti…

His commitment to contemporary music is mirrored in his discography, which includes Boulez’s 'Structures' for two pianos with Pierre-Laurent Aimard (DGG), Berio’s 'Sequenza' for piano (DGG), Bartok’s 2nd Sonata for violin and piano with Isabelle Faust (hm) as well as a CD dedicated to Debussy and Bartok’s 'Etudes pour piano' (also hm).