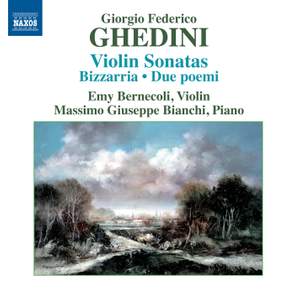 Should these works enter the repertory, prospective performers will find themselves having to measure up to the Bianchi/Bernecoli duo's impassioned, technically polished and rhythmically rock-solid... — Gramophone Magazine, September 2013 More…

Ghedini: Violin Sonata in A major

Ghedini: Violin Sonata in A major

Although Giorgio Federico Ghedini’s proud independence and lack of adherence to any particular school brought him into conflict with the avant-garde, he is now increasingly recognised as one of the finest Italian composers of the 20th century. Marking the 50th anniversary of Ghedini’s death, this recording reveals an aspect of his repertoire yet to be fully appreciated and is a significant addition to the repertoire. Contemporary with those of Respighi, Pizzetti and Alfano, the Violin Sonatas display a real sense of creative freedom and are notable for their structural originality, beautiful harmonies and tonal and rhythmic invention. Ghedini’s complete piano works can be heard on Naxos 8572329 and 8572330.

This release is preceded by two volumes of Ghedini’s complete piano works performed by Massimo Giuseppe Bianchi, and welcomed as a “long-overdue insight into an underrated and enigmatic composer.” (MusicWeb International on Vol. 2) Marking the 50th anniversary of Ghedini’s death, this CD reveals a further aspect of a repertoire yet to be truly appreciated, but due to take its rightful place as a significant part of Italy’s 20th century musical legacy.

Should these works enter the repertory, prospective performers will find themselves having to measure up to the Bianchi/Bernecoli duo's impassioned, technically polished and rhythmically rock-solid interpretations.