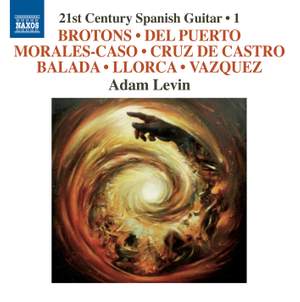 There's a gratifying amount of diversity on display here...There are three more volumes to come. If they're as good as this, they'll form one of the most exciting guitar series of the century... — MusicWeb International, 26th August 2013 More…

Balada: Caprichos No. 8 ‘Abstractions of Albéniz’

I. Abstraction of Triana

I. There was an apple tree

VI. The rest is memory

This first of four volumes represents award-winning guitarist Adam Levin’s major collaboration with the new century’s ‘Spanish Masters’. Bridges to the past include medieval sources in the Secuencia Sefardita and Baroque in the unconventional variations of Handeliana. These stand alongside pastoral scenes in Viento de Primavera and a celebration of Albéniz from Leonardo Balada. From contemplative moods to spectacular virtuosity, this is a musical voyage both unexpected and unforgettable. Adam Levin has been acclaimed for his ‘enviable technique’ and a ‘high musicianship which shines like a beacon through his performances’. (Classical Guitar magazine)

This is the first of a major four volume project which will present 30 new Spanish works for guitar recently commissioned as part of Adam Levin’s residency in Spain. Amongst a wealth of exciting new names there are some which are more familiar, such as Salvador Brotons, who has appeared on Naxos as conductor of several ‘Spanish Classics’ titles. An even greater presence in the Naxos catalogue, collectors of Leonardo Balada’s works will also gravitate towards this release with the series of Caprichos suites already represented on 8572176 and 8572625. The emphasis here is however more on Adam Levin’s remarkable position as catalyst for an entire new repertoire of contemporary Spanish guitar music. Reviving and continuing a great tradition, these are new works which are destined to take a significant place in the guitar repertoire of the 21st century.

There's a gratifying amount of diversity on display here...There are three more volumes to come. If they're as good as this, they'll form one of the most exciting guitar series of the century so far.