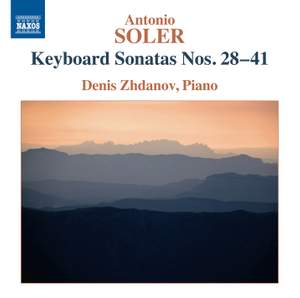 Soler, A: Keyboard Sonata No. 41 in E flat major

Antonio Soler’s eminent position at the eighteenth-century Spanish court led to a series of important works, both sacred and secular. Of them, the best known are his keyboard sonatas, many of which were written for the young prince, Don Gabriel, son of Carlos III. The sonatas manage to absorb the influence of Domenico Scarlatti but also exude the prevailing modernist trends of Vienna. Some are designed in pairs, and many employ subtle echo effects, syncopation and exciting, athletic leaps that show his delight in repetition and contrast. This is Volume 3 of the complete Soler Keyboard Sonatas.

Soler’s exciting keyboard works are some of the most audacious and attractive in all Spanish music of the eighteenth century. They are played on a piano, and will appeal to those who love the music of Scarlatti, Seixas and their contemporaries.