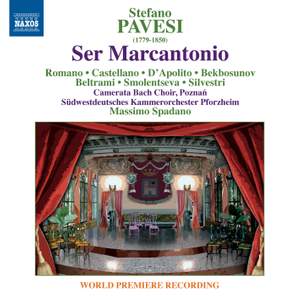 Stefano Pavesi’s work was swept away by the Rossini operatic avalanche and he is now almost forgotten, but while his vibrantly entertaining (though not without a touch of melancholy) melodramma giocoso Ser Marcantonio has many Rossinian features the young Gioachino’s operatic career was yet to begin when it was first staged. The libretto sets up a typical late eighteenth-century opera buffa plot full of intrigue, buffoonery, disguises and cases of mistaken identity, which may be summarised as “about preventing an old fool from making an ill-advised marriage and stopping his heir from gaining his rightful inheritance”.

Stefano Pavesi’s Ser Marcantonio may be the only of his many operas to have survived beyond the subsequent mania for Rossini, but it has taken this vibrant 2011 production from the Rossini in Wildbad festival to see it appear on CD. Highly enjoyable in its own right, this comic opera also has historic significance to recommend it, serving as it does as a model for both Rossini and Donizetti in his Don Pasquale both musically and in the links formed by librettist Angelo Anelli. Of the young and vibrant festival cast, Marco Filippo Romano (Mercantonio) has been described as singing “with glorious clarity and… perfect comic timing.” (Inquirer.net)