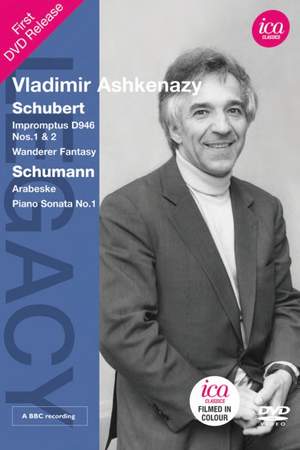 This is a monumental performance [of the Wanderer] and brings together sensitive phrasing and formidable technical skill...the camera-work is well-judged, with a variety of close-up and panning... — MusicWeb International, 29th August 2013 More…

Released on DVD for the first time – and the first release from ICA of this astounding artist – this is a rare glimpse into Ashkenazy as a pianist, in the intimate surroundings of a studio.

Captured at the BBC’s Glasgow Studios in 1987 for their Music in Camera series, Ashkenazy demonstrates his talent and artistry as a pianist through this solo performance.

Born in Gorky (now Nizhny Novgorod), in Russia in 1937, Ashkenazy started playing piano at the age of six, showing prodigious talent. He defected from the Soviet Union to London in 1963, becoming an Icelandic citizen in 1972, and later taking up his current residence of Switzerland – all the while maintaining his artistic integrity. As his career as a pianist blossomed, he took up the baton, becoming principal conductor of the Royal Philharmonic Orchestra and the conductor laureate of the Czech Philharmonic.

A multifaceted performer, his talents as a pianist helped him to mould a career that has been recognised with many rewards, including second prize at the 1955 International Chopin Competition in Warsaw, first prize at the Queen Elisabeth Music Competition in Brussels a year later and joint first, together with John Ogdon, at the Tchaikovsky Competition in Moscow in 1962. He is a multiple Grammy Award winner and is widely considered to be ‘one of the great virtuoso pianists of our era’ (The Guardian).

This DVD showcases Ashkenazy at the peak of his powers as a pianist, performing Schubert’s Impromptus D946 Nos. 1 & 2 and the Wanderer Fantasy, alongside Schumann’s widely-loved Arabeske and Piano Sonata No.1 – a piece that is certainly an unusual and interesting choice for such a recital. His calm exterior means that all of his energy is projected into infusing this performance with the variety each piece affords.

The recital demonstrates Ashkenazy’s versatility and musical skill through the extreme contrasts of the Impromptus, the lyrical, song-like grace and virtuosic flair of the Wanderer Fantasy, and the elegant yet exciting rendition of Schumann’s innovative Piano Sonata No.1.

This is a monumental performance [of the Wanderer] and brings together sensitive phrasing and formidable technical skill...the camera-work is well-judged, with a variety of close-up and panning shots. Ashkenazy’s small hands are very much in evidence.