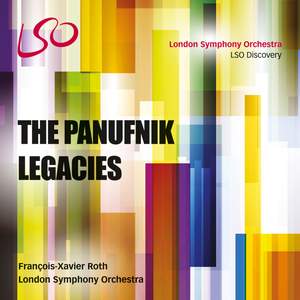 There are plenty of imaginative sounds in The Panufnik Legacies… In Fleotan, Charlie Piper creates the sense of sounds suspended in the air, while in Christopher’s Mayo’s Therma, earthy rumblings... — BBC Music Magazine, June 2013 More…

Suckling: Fanfare for a Newborn Child

In May 2013, LSO Live releases an album of new works by 10 emerging young composers. The pieces, originally commissioned as part of the LSO Panufnik Scheme, were recorded in LSO St Luke’s and are now presented on disc, enabling the LSO to share and promote the composers’ music world-wide. The LSO Panufnik Scheme began in 2005 and each year offers six composers the opportunity to write a three-minute piece for the LSO under the guidance of renowned composer Colin Matthews. The scheme was devised by the Orchestra in association with Lady Panufnik in memory of her late husband, Andrzej.

This recording showcases the works of selected composers from across the first five years of the scheme, representing the eclectic range of styles and influences of the 45 composers who have now worked with the Orchestra through this scheme. Many of these composers have gone on to receive additional commissions from the LSO since the scheme’s inception.

As part of the LSO St Luke’s 10th Anniversary celebrations Jason Yarde has been commissioned to write a piece for LSO Brass & Percussion, to be performed in April. In 2013 Christian Mason will have works premiered at Lucerne Festival and Tanglewood. In May Eloise Glynn will have premiered her piece for the Hebrides Ensemble at the Bath International Festival and Martin Suckling is due to have pieces performed by the BBCSSO (a BBC commission) and Scottish Ensemble. As composer in residence of the Manchester Camerata, Christopher Mayo will have a world premiere of his commission in May. Vlad Maistorovici is currently working on a violin concerto for Valery Sokolov.

There are plenty of imaginative sounds in The Panufnik Legacies… In Fleotan, Charlie Piper creates the sense of sounds suspended in the air, while in Christopher’s Mayo’s Therma, earthy rumblings gradually erupt. A highlight for me, though, was Eloise Nancie Gynn’s Sakura in which darker forces emerge and subside against a backdrop of atmospheric shimmers.

There can hardly be a better and more productive way of remembering a composer than an enterprise such as this...the future of music in Britain is assured when music of the calibre of what is on this disc is being written...I urge music-lovers everywhere to listen to this disc