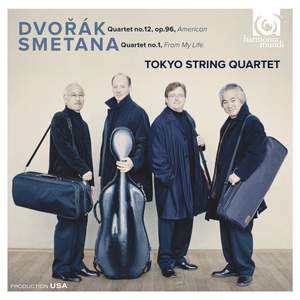 In some ways, the Tokyo Quartet on this splendid recorded CD seem almost too relaxed at the start of the American...[They] respond rather better to the tragic drama of Smetana's From My Life... — BBC Music Magazine, June 2013, 3 out of 5 stars More…

In its valedictory release, the world-renowned Tokyo String Quartet presents a pair of well loved chamber works offering a glimpse into the private world of two Czech composers. Antonín Dvorak and Bedrich Smetana – although they were sometimes regarded as musical opposites in their homeland – together they came to represent the quintessential sound of 19th-century Czech music.

Regarded as one of the supreme chamber ensembles of the world, the Tokyo String Quartet has captivated audiences and critics alike since it was founded 45 years ago. Performing over 100 concerts worldwide each season, the quartet has a devoted international following that includes the major capitals of the world and extends to all four corners of the globe.

Officially formed in 1969 at the Juilliard School of Music, the Tokyo String Quartet traces its origins to the Toho School of Music in Tokyo, where the founding members were profoundly influenced by Professor Hideo Saito. An exclusive collaboration with Deutsche Grammophon (more than 40 landmark recordings) firmly established it as one of the world’s leading quartets. The ensemble's recordingss for harmonia mundi USA have included an acclaimed cycle of Beethoven’s string quartets. Its most recent release was devoted to the Brahms Quintets Op. 34 (with Jon Nakamatsu, piano) and Op. 115 (with Jon Manasse, clarinet).

In some ways, the Tokyo Quartet on this splendid recorded CD seem almost too relaxed at the start of the American...[They] respond rather better to the tragic drama of Smetana's From My Life Quartet. The opening of the first movement is as shocking as it should be and the subsidiary material is rich in sentiment.

The beauty of these performances lies in their immaculate voicing, their keen sense of tonal perspective and the way the quartet leans this way or that at the behest of a particular phrase or gesture. Neither effete nor especially idiomatic, they promote a rare musical intelligence

The Tokyo Quartet offer great warmth and sensitivity, and an immediacy and intimacy which draws the listener in...I definitely give the thumbs-up to this recording.

Does the Tokyo’s superb playing of Dvorak’s “American” lack the authentic Czech bite?...the playing is so fine, the glow of the four Stradivarius instruments so beautiful, such doubts hardly register. What matters is that these musicians perform the music con amore. The tragic conclusion of the Smetana... is devastating.