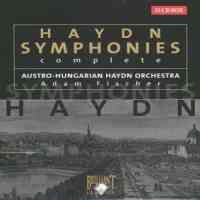 It was little short of tragic that the very last box of symphonies in Adám Fischer's Haydn series for Nimbus, Nos 21 to 39 plus the Symphonies A and B, appeared just as the demise of that label... — Gramophone Classical Music Guide, 2010 More…

One of the major recording projects of the last ten years: the recording of the complete 104 symphonies by Joseph Haydn.

Performed by the Austro-Hungarian Haydn Orchestra conducted by Adam Fischer. This orchestra was especially formed for these recordings by first-desk players from the Wiener Philharmonic and the Hungarian State Orchestra. These players maintain the unique Central European performing practice. It is difficult to describe this practice: it is a natural flow of ritardandi, rhythmical deviations and accents, which make the music come alive and reveal its innate dramatic quality.

Played on modern instruments. Why? because the players come from the big and the best symphonic orchestras, and are used to their instruments. Moreover, the players perform in a living tradition, and have developed their own musical language.

Each symphony was recorded in the magnificent Haydnsaal of the Esterhazy Palace in Eisenstadt, where Haydn actually worked as a Kapellmeister, giving this project an unique authentic feeling.

It was little short of tragic that the very last box of symphonies in Adám Fischer's Haydn series for Nimbus, Nos 21 to 39 plus the Symphonies A and B, appeared just as the demise of that label was announced in January 2002. The final box was the finest of the series, but all too few copies reached the shops, making this 33-disc box covering all the symphonies very welcome indeed, even if over the 14 years that it took to complete the project, the quality and style varied.
That final box of 20 symphonies was a superb culmination to the project. Not only are they a fascinating sequence of works written in the 1760s when the young Haydn was busy experimenting, the performances are outstanding.
They were recorded as recently as 2000 and Haydn Orchestral 551 2001, and far more than the earliest recordings in the series, they take full note of period practice while staying faithful to modern instruments.
More than ever one registers the individual virtuosity of the various soloists in the orchestra, often challenged to the limit by fast speeds. So a movement like the variation finale of No 31, the Hornsignal, features a sequence of brilliant soloists such as Haydn might have been writing for in his Esterházy orchestra – violin, cello, horn and so on, even double bass. It's a performance full of panache, with the four horns braying out superbly.
Other striking symphonies in the group include No 22 in E flat, The Philosopher, with its extraordinary parts for two cors anglais. Also the Alleluia Symphony, No 30 in C, with trumpets and drums dramatically added to the usual published scoring – brought in later, according to HC Robbins Landon, by Haydn as an option.
The minor-key works in this last batch, such as the Lamentatione, No 26 in D minor, and best of all, No 39 in G minor, are fine examples of Haydn's Sturm und Drang manner, with Fischer heightening dynamic contrasts to good effect.
No 39 brings an example of Fischer's mastery when he enhances the tension of the nervy opening and exaggerates the pauses; he's far more effective in that movement than Dorati .
While with those symphonies recorded at the beginning of the project, from 1987 to 1990, comparisons with the Dorati series have the merits of each balanced fairly evenly, the advantage certainly tips in favour of Fischer as the project developed. For the London Symphonies, Nos 93 to 104, the first to be recorded, the Nimbus engineers – working in the very hall at the Esterházy Palace which Haydn used – produce rather washy sound, whereas the works recorded later benefit from a sharper focus. In those early recordings, too, the slow movements tend to be taken at the sort of broad speeds of tradition, with warmly expressive phrasing.
At that point, no doubt, Fischer was just beginning to woo his select band of Austrian and Hungarian musicians away from their usual Romantic manners. In his notes Fischer makes a point of describing the unfolding development of the project over 14 years. He becomes increasingly aware of historically informed style, notably in faster speeds for both slow movements and minuets (which increasingly acquire a scherzo-like flavour), giving him a clear advantage over Dorati. Also the string playing comes closer to that found in period orchestras, with lighter phrasing and less marked use of vibrato.
That development is noticeable as early as the recordings made in 1994-5, when most of the Sturm und Drang symphonies were covered – broadly those in the late 40s and early 50s in the regular Breitkopf numbering. Finales in particular, taken fast, have all the bite and wildness one could want, with pinpoint attack. The very earliest symphonies in numerical order, Nos 1 to 20, were recorded early in the project between 1989 and 1991, with results that are more variable. The finale of No 12, for example, marked Presto, is taken surprisingly slowly, almost like a minuet. No 13, very adventurously for that early period, uses four horns, yet because of the reverberant acoustic they don't ring out as prominently as those used in works like the Hornsignal, recorded later.
Even in these early symphonies, recorded near the beginning of the project, the trios in Minuets have solo strings, and regularly the vigour and thrust of Allegros is exhilarating, with rhythms lifted and admirably crisp ensemble.
This is a set guaranteed to encourage collectors to delve into works which from first to last convey the joy in creation that's the unfailing mark of this ever-welcoming master. If you have an MP3 player or listen via your computer Nimbus offer the entire cycle on eight discs of MP3 files, easily downloaded for use with your iPod.