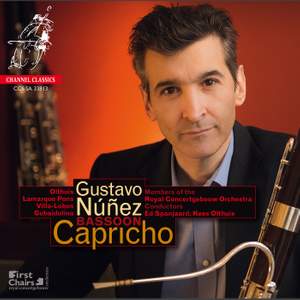 a player of jaw-dropping agility and effortlessly suave tone...Núñez's performance [of the Gubaidulina], and that of the Concertgebouw cellos and basses, is impressively vivid. — The Guardian, 23rd May 2013,

Gustavo Núñez, principal bassoon with the Royal Concertgebouw Orchestra, is considered one of the best bassoonists of his generation. He was born in Montevideo, Uruguay, in 1965.

After playing the violin for several years, he switched to the bassoon at the age of eleven and was first taught by his father.

From the age of sixteen he studied with Kerry Camden at the Royal College of Music. From 1984-1988 he pursued his studies with Klaus Thunemann in his prestigious class in Hannover, Germany. Still a student, Gustavo Núñez was awarded the Prix Suisse at the International Competition in Geneva, and the Carl Maria von Weber Prize in Munich, both in 1987. In 1988 he played with the Darmstadt opera and from 1989 he was principal bassoon with the Bamberg Symphony Orchestra, where he remained until his Concertgebouw appointment in 1995.

In addition to his work with the Royal Concertgebouw Orchestra, Gustavo Núñez teaches at the Robert Schumann Academy of Music in Düsseldorf, Germany.

a player of jaw-dropping agility and effortlessly suave tone...Núñez's performance [of the Gubaidulina], and that of the Concertgebouw cellos and basses, is impressively vivid.