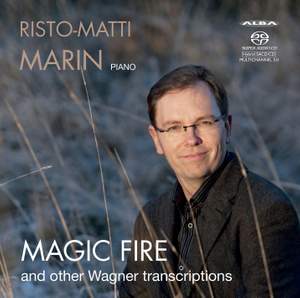 Magic Fire and other Wagner transcriptions

Nykänen: Paraphrase on the themes of The Flying Dutchman

Busoni: Funeral March from The Ring of the Nibelung (after Wagner)

Risto-Matti Marin’s new release Magic Fire and other Wagner Transcriptions includes piano transcriptions by six composers in honour of Wagner’s anniversary in 2013. Risto-Matti Marin (b.1976) graduated as a Doctor of Music from the Sibelius Academy in 2010 with an artistic degree in piano transcriptions. His solo CD’s on Alba range from baroque and romantic music all the way to contemporary works. All have received high acclaim from home (Finland) and abroad.

This disc has been programmed with great care, the more effusive transcriptions sandwiched between those of interior delight...Magic and fire aplenty; Risto-Matti Marin is a pianist of style and substance.