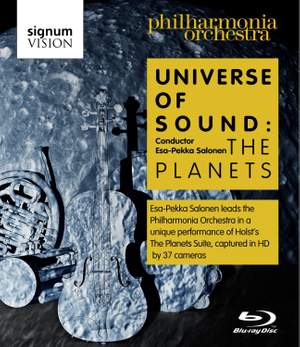 Offer, Universe of Sound: The Planets

Purists may object to 'Neptune' not fading out but seguing into a very Hollywood-esque addition by Joby Talbot. There's ample compensation, though, in the extras, including a 'making of' documentary... — BBC Music Magazine, July 2013, 4 out of 5 stars More…

Esa-Pekka Salonen leads the Philharmonia Orchestra in a unique performance of Holst's 'The Planets Suite', captured in High Definition by 37 cameras. This immersive experience takes the viewer to the heart of the Philharmonia as they perform this well-loved piece, using cameras placed in a multitude of positions and angles to create an extraordinary glimpse of the orchestra at work from within. As well as 'The Planets', the filmed performances also includes a new commission by UK composer Joby Talbot, 'Worlds, Stars, Systems, Infinity'. Additional features include a 'Making of' documentary feature, listening guide films for each planet, audio commentaries from conductor Esa-Pekka Salonen and principal players of the Philharmonia and, for Blu-Ray only, a picture-in-picture option that allows a simultaneous view of the conductor and orchestra in action. The Philharmonia Orchestra is committed to bringing classical music to new audiences in creative and exciting ways, and to this end has become a technological trailblazer in its adoption and adaptation of new technology. In 2010 the Re-Rite project allowed members of the public to experience Stravinsky's 'Rite of Spring' for the first time from within the orchestra through audio/visual projections. Their 'Universe of Sound' project from which this release stems debuted at the Science Museum in London last year, and is set to tour the country in new installations during 2013. This blu-ray includes:

* A bonus 'Making of' documentary and listening guides for each planet

Purists may object to 'Neptune' not fading out but seguing into a very Hollywood-esque addition by Joby Talbot. There's ample compensation, though, in the extras, including a 'making of' documentary and a 'Commentary with Principal Players'

The centrepiece...is a tautly rehearsed, unromantic, 'straight' performance of the piece under Salonen which will appeal to those who like Holst's own 'original' recordings...Filming and recordings of the performance are both state-of-the-art