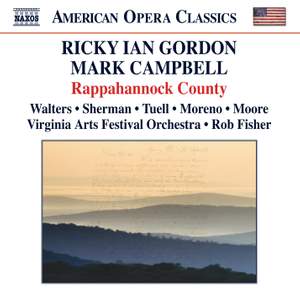 Part I: Mine (Two Nameless Slaves)

Part III: All I Ever Known (Lily Quinn)

Part V: This Was Our House (Susan Johnson and Family)

V. What the Living Do

Inspired by diaries, letters, and personal accounts from the 1860s, Rappahannock County is a music-theatre work which movingly and dramatically commemorates the 150th anniversary of the American Civil War. The location of the Rappahannock River as a border between North and South is a metaphor for the region’s many conflicts. Performed by a cast of five singers who play over 30 rôles, the piece brings this dramatic historical period to life in songs which express the devastating impact of the Civil War on all of the people who endured it. Ricky Ian Gordon’s music has been described as ‘caviar for a world gorging on pizza’ (The New York Times), and Rappahannock County has been commended for its ‘effusiveness and accessibility’ by The Washington Post.

Gordon is yet to become a household name beyond the USA, but with its remarkably strong cast Rappahannock County is a richly expressive and fresh new work, having a global and contemporary appeal its universal messages of human suffering and survival amidst conflict and crisis. Rappahannock County was summed up by The Washington Post as the “continuation of a tradition of American works poised on the cusp of opera and Broadway (think Gershwin, Weill or Sondheim).”