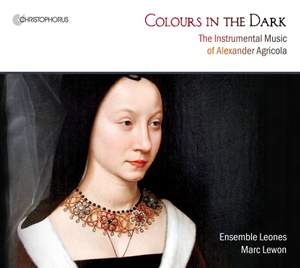 Colours in the Dark

Agricola, A: In minen zin

Agricola, A: Fors seullement a 4

Agricola, A: Tout a par moy

Agricola, A: Le serviteur a 4

Agricola, A: Fortuna desperata a 6

Agricola was already considered one of the 'old masters' soon after his death in 1506. His works were approached with veneration and, already in the early 16th century, regarded as examples of good and demanding counterpoint. As a member of the first generation of genuinely instrumental composers, he wrote not only the masses, motets and chansons that were customary during this period, but also a large number of works without text that were obviously created for instruments by virtue of their construction. As a result, his musical rhetoric went considerably farther than his otherwise congenial colleagues Josquin Desprez and Heinrich Isaac, and he composed instru¬mental works that were far ahead of his time.

It has been most fortunate to gain the cooperation of the English Agricola expert Fabrice Fitch as a partner for Ens Leones. Alongside his musicological activities, Fitch has also made quite a name for himself as a composer working with themes and motifs of Alexander Agricola in his 'Agricologies'. For the present programme, Fitch has composed two more 'Agricologies' specially for Ens Leones, tailor-made to suit the ensemble combination. With this, Agricola's compositional arm extends into our own time.

"I would like to dedicate this recording to my teacher and friend Crawford Young, whose enthusiasm for Agricola’s works inspired my own studies of this composer. I want to thank him for communicating his knowledge and for participating in the present recording." Marc Lewon

Ensemble Leones' imaginative instrumental combinations and Fitch's fascinating, 'playful' reworkings of reworked works make an effective case...Listening to this attractive, evocative recording and gradually taking on board its many facets are fresh musical experiences well worth having.

This music rejoices in a sense of freedom, while two substantial original works prove equally arresting. They are all played here with palpable joy.