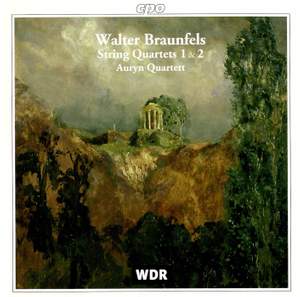 The career of the composer Walter Braunfels followed an unfortunate course frequently encountered in Germany during the first half of the twentieth century. He celebrated his breakthrough in the 1920s and was very successful above all with his opera Die Vögel (The Birds); but when Hitler came to power, these promising developments in the public eye were tragically cut off. Since Braunfels was half-Jewish, he was removed from all his posts in 1933, and the performance of his works was prohibited. During the following years (1933-45), Braunfels wrote music of the greatest compositional maturity: three full-length stage works and a series of chamber compositions consisting of three string quartets and a string quintet. This release of the Quartets Nos. 1 and 2 from the next-to-last war year with the Auryn Quartet marked a recording premiere. It reflects the outlook of a composer who knew what it meant to experience isolation, and believed that in creative practice one can ‘find solace in that world of order in which even the profoundest suffering assumes heightened significance because it is presented as an offering.’