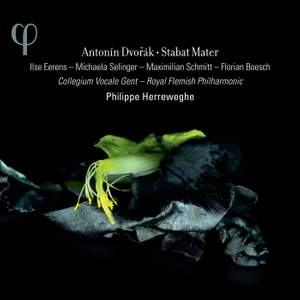 Herreweghe's tempo in the epic first movement is relatively brisk, which makes its central section seem slightly rushed. Pity, since the soloists are excellent and the choral sound is nicely... — BBC Music Magazine, September 2013, 3 out of 5 stars More…

Antonín Dvorak’s daughter Josefa died on 21 September 1875. In response to this bereavement, Dvorak composed the initial version of his Stabat Mater – for four soloists, choir, and piano – between 19 February and 7 May 1876. He then set the work aside without orchestrating it. Soon after this, he lost his other two children in the space of a few weeks, his daughter Ružena on 13 August and his son Otokar on 8 September 1877. At this point he returned to the manuscript abandoned the previous sacred music and established him notably in Great Britain, where his reputation was to remain firm for the rest of his life.

This rarely recorded masterpiece has also inspired Philippe Herreweghe and Collegium Vocale Gent. Along with the Royal Flemish Philharmonic, they strip the work of all Romantic excess. The result is a spiritual journey from the sombre opening bars to the final Amen, underlining the universal grandeur of this major work of sacred music.

Herreweghe's tempo in the epic first movement is relatively brisk, which makes its central section seem slightly rushed. Pity, since the soloists are excellent and the choral sound is nicely focused.

all of Herreweghe's performers clearly love this ravishing music, relishing every detail of this beautifully nuanced score...the choral sound is warm and wide without any congestive blasting...What is especially pleasing is the soloists' contribution. They really listen to each other and achieve a subtle blend...This new release must be the top choice.

Herreweghe, abetted by intelligent recording, has clearly taken much trouble to make these [solo] voices blend with the Collegium Vocale Gent and also with Dvorak's beautifully sensitive orchestration.