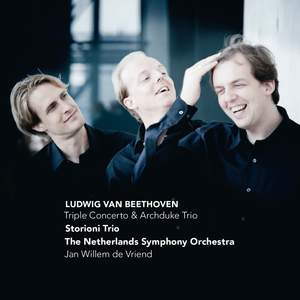 Those who might not count the Triple Concerto among Beethoven's finest works could well be swayed by this intelligently balanced, beautifully played performance...in the Archduke Trio, the Storioni... — Gramophone Magazine, July 2013 More…

In recent years the Storioni Trio has established itself as the leading Dutch piano trio. On this disc they perform two of Beethoven’s major works, the Triple Concerto opus 56, and the “Archduke” Trio opus 97. They are joined in the concerto by the Netherlands Symphony Orchestra and conductor Jan Willem de Vriend.

The Storioni Trio was founded in 1995 and the members of the trio are artistic directors of the annual Storioni Festival which has takes place annualy in Eindhoven during January. In the four previous years of the event guest perfomers have included Gidon Kremer, Jean- Yves Thibaudet, Natalia Gutman, Mischa Maisky, and the Brentano and Skampa Quartets.

Recently the Storioni Trio has performed the Beethoven Triple Concerto with the orchestras of Limburg, Brabant, Enschede, Mannheim and Dortmund. The trio has received various prizes and awards, and performs regularly on radio and television. The 4 CDs that the group have recorded for the label Pentatone which have featured works by Brahms, Röntgen, Schubert and Beethoven, have gained recognition from international publications including the Gramophone and The Strad.

Those who might not count the Triple Concerto among Beethoven's finest works could well be swayed by this intelligently balanced, beautifully played performance...in the Archduke Trio, the Storioni are equally impressive, stylistically deep inside the music and conveying both its muscle and its inspired allure.

The Storioni Trio is an ensemble to be reckoned with, and their performance is nuanced towards every detail of Beethoven’s phrasing and dynamic range. The orchestra too, under Jan Willem de Wriend, is sensitive in supporting the solo group. As such the performance in this beautifully engineered CD deserves the highest praise

This is Beethoven at both his most grandly festive and his most playful and teasing, revelling in the exploration of new colours and textures, which in the largo achieve a rapt beauty. These splendid Dutch forces do it proud.