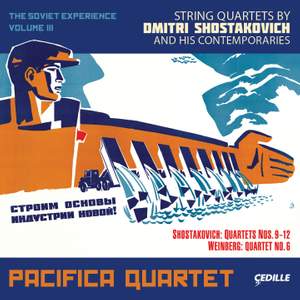 the Pacificas demonstrate strong empathy with the contrasting emotional narratives of each work and probe well beneath the surface simplicity of some of the writing...The Pacifica Quartet brilliantly... — BBC Music Magazine, August 2013, 5 out of 5 stars More…

This is the third instalment in the Pacifica Quartet’s highly anticipated, and already highly acclaimed four-volume CD survey of the complete Shostakovich string quartets: The Soviet Experience: String Quartets by Dmitri Shostakovich and his Contemporaries.

It is the first Shostakovich quartet cycle to include works by other important composers of the Soviet era, adding variety and perspective to the listening experience.

This superbly performed series of audiophile recordings, produced and engineered by multiple Grammy Award winner Judith Sherman, will appeal to everyone interested in great Russian music of the 20th century.

The Pacifica’s previous instalment, The Soviet Experience Volume II, received an extraordinary reception from critics. “The playing is nothing short of phenomenal, bringing new dimensions of interpretative depth and a subtle fusion of intensity and clarity. . . . When the series is complete, it looks set to be the one to own” (The Telegraph).

the Pacificas demonstrate strong empathy with the contrasting emotional narratives of each work and probe well beneath the surface simplicity of some of the writing...The Pacifica Quartet brilliantly negotiates [the Weinberg's] considerable technical hurdles, investing the music with conviction and blazing emotional intensity.

Encounters with the Shostakovich quartets are not to be approached lightly, but the Pacifica Quartet proves a wonderfully committed and eloquent guide.

I am glad to have these permanent records of interpretations that strike at the heart of the music, defining the distinctiveness of each quartet and conveying the substance with subtlety, polish and a finely judged spectrum of expression.

There is a wintry beauty in the Pacifica’s rendition of these tormented quartets and even where the mood is bleak, the sound radiates warmth and reconciliation.