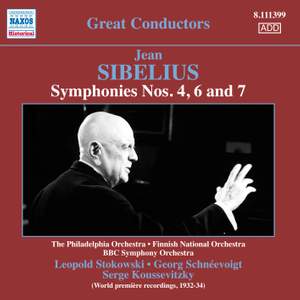 Three historically significant première recordings of Sibelius symphonies are brought together on this reissue for the first time. Finnish conductor Georg Schnéevoigt was close to Sibelius and a perceptive interpreter of his music, making this lucid and controlled first recording of the Sixth Symphony following the death of Robert Kajanus, who was to have recorded the complete symphonies. Made during the Great Depression, Leopold Stokowski’s compelling performance of the Fourth Symphony reflects the composer’s ‘solitude and pain’. Renowned Russian conductor Serge Koussevitzky directs Sibelius’s final Seventh Symphony in a famously intense live performance.