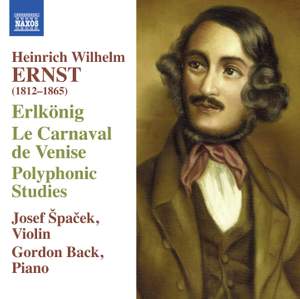 Etude No. 2 in A major: Allegretto

Etude No. 3 in E major: Terzetto

The Moravian Heinrich Wilhelm Ernst is a dazzling example of the nineteenth-century violinist-composer, of whom the greatest was Ernst’s sometime rival, Paganini. Indeed it was the Italian who persuaded Ernst to follow the life of a touring virtuoso, in which rôle he was to perform with the greatest musicians in Europe, earning the admiration of men such as Chopin and Mendelssohn. The Elégie sur la mort d’un objet chéri, mentioned by Tolstoy in The Kreutzer Sonata, was one of the best-known violin works of the century, and the Polyphonic Studies offer a compendium of violin technique on a par with the works of Paganini himself.