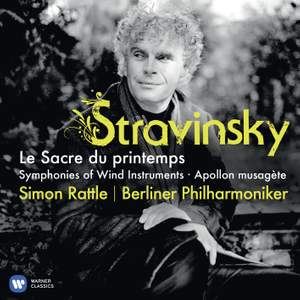 the physical impact here of maximum Berlin Philharmonic firepower is part of what the music itself calls for...Compared to the clotted cream sonorities in evidence here, Rattle's CBSO recording... — BBC Music Magazine, May 2013, 5 out of 5 stars More…

Variation of Apollo (Apollo and the three Muses)

Variation of Calliope (the Alexandrine)

Recording of the Week, 100th anniversary of the première of Stravinsky's The Rite of Spring

The centenary of one of the most controversial premieres in musical history is marked by a new recording from Sir Simon Rattle and the Berliner Philharmoniker, and a mammoth Collector’s Edition comprising 38 recordings dating from 1946 to 2010.

Sir Simon Rattle and the Berliner Philharmoniker, whose Grammy® award-winning accounts of Stravinsky’s Symphony in C and Symphony of Psalms are among Gramophone magazine’s Top 10 Stravinsky Recordings (2011), return to the composer with a recording of the ground-breaking ballet Le Sacre du printemps, whose premiere a century ago marked a turning point in 20th century music history. The programme on this release also includes new recordings of Stravinsky’s Symphonies of Wind Instruments and Apollon Musagète, another of the Russian master’s breathtaking ballets.

Although the premiere of Igor Stravinsky’s Le Sacre du printemps in Paris on 29th May 1913 famously set off a near-riot, the work quickly became recognised as one of the most influential musical works of the 20th century. The 100th anniversary of the premiere will be commemorated with performances all over the world in 2013 and, no doubt, with some new recordings. On record and in performance, Simon Rattle has championed the orchestral works of Stravinsky with insight and dedication over many years and this latest recording is an important addition to his Stravinsky discography.

the physical impact here of maximum Berlin Philharmonic firepower is part of what the music itself calls for...Compared to the clotted cream sonorities in evidence here, Rattle's CBSO recording is far truer to the music's poised incisiveness and grace. But his new reading of The Rite of Spring with the Berlin Philharmonic is a formidable achievement.

You could be forgiven for thinking this was still Herbert von Karajan’s orchestra, such is the depth of colour in The Rite of Spring and weight of string sonority in Apollon Musagète.

This is a pretty considerable account of Le Sacre. I think there is, at times, a degree of greater urgency than was the case in 1987 - perhaps the presence of an audience helped; perhaps it’s the fact that an even more experienced Rattle is now at the helm of a virtuoso orchestra...a refined and excellent performance of Apollon Musagète which benefits not only from the virtuosity of the Berlin string players but also from the fastidious ear of their conductor.

What struck me most was Rattle’s focus on the work’s sensuality, especially in its early stages. Even the opening bar is seductive rather than primitive...Little details that I often listen for are happily present and correct: the groaning horns come through wonderfully in the section entitled Dances of the Young Girls

Stravinsky famously disliked Karajan’s supersmooth 1960s account with this orchestra, but he surely would have responded more positively to Rattle, who never allows sheer beauty of sound to undermine the rhythmic pulsing...The Berliners’ strings may be plusher than Birmingham’s, and the woodwind soloists are instrumental royalty, but Rattle preserves the visceral barbarism of this ever-astonishing score.

The performances all have the sense of utter security, tonal depth and fabulous dynamic range that are characteristic of the Berlin Philharmonic in Rattle's era...The Berliners are so much on top of their parts that there is something almost too secure about the result...It's a superbly judged performance, with just the right balance between individuality in the wind playing and immaculate ensemble

it is the suavity of the score that startles, especially in Rattle's subtle use of rubato (stolen time) and the cool sensuality of the woodwind solos. Those woodwind players – currently vying with the principals of the Concertgebouw for the title of world's finest – shine again in Stravinsky's Symphonies of Wind Instruments.

[Stravinsky] would surely have warmed to this new version. Rattle’s sense of pacing and proportion is unerring, and the sound has a startling vividness that makes this familiar piece seem new. One hears thickets of ticking, twittering inner parts that normally stay in the background.

Beautiful, all beautiful. But beauty is not enough. We also need the primitive and rude: ingredients that Rattle and the suave Berliners tend to deliver wearing kid gloves...If you’re after an interpretation in love with the score’s quieter corners, go for Rattle with confidence; if you want Stravinsky red in tooth and claw, he’s often hard to find.

It’s indecently luxuriant and played with a confidence which almost borders on complacency...This recording is full of...sounds which will have you dusting down your miniature score in disbelief. Rarely has the second half’s intro sounded so decadent and sweaty, and I whooped for joy at hearing a normally inaudible low horn rasp a few minutes near the close.