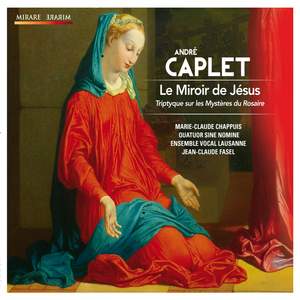 The instrumentalists are refinement and rarefaction personified, and the women of the Ensemble Vocal Lausanne sound thoroughly angelic. — International Record Review, May 2013

Caplet's mystic 'Le Miroir de Jésus', a setting of poems by Henri Ghéon composed in 1923, is highly unusual in its structure of 15 sections in which the Christian meditates on the mysteries experienced by the Virgin Mary through events in the life of her Son, as if in a 'mirror' of herself. Equally unusual is its scoring: mezzo-soprano, female chorus, harp and string quintet.

Caplet's own innovative works have been overlooked for the most part. Especially interesting is his instrumental use of voices, as in 'Le Miroir de Jésus', which features a nine-voice "choeur de femmes" in an accompanying role Caplet termed "voix d'accompagnement". The solo vocal line owes something to Mélisande but also to Schoenberg's 'Pierrot Lunaire'. Though unique of its kind 'Le Miroir de Jésus' may nonetheless be seen with hindsight to belong to an eminently French tradition that goes back to Gounod through Fauré, Debussy and Tournemire and foreshadows Messiaen's 'Trois Petits Liturgies de la Présence Divine'. It was premiered by the composer in 1924, in Lyon, with Claire Croiza as soloist. A rare, refined work, for contemplation as much as listening.

The instrumentalists are refinement and rarefaction personified, and the women of the Ensemble Vocal Lausanne sound thoroughly angelic.