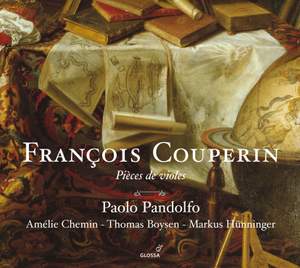 Pandolfo is a master of the style; in slow movements barely a note passes without some subtle bowing nuance or full blown ornament… recorded sound is excellent. — BBC Music Magazine, August 2013, More…

Couperin, F: Les gouts-reunis: Concerto No. 10 in A minor

The confidential, almost secretive, musical world of François Couperin is known through the innumerable emotional connections made in his harpsichord works, but he was also able to produce the same sensations when writing for the viola da gamba. Paolo Pandolfo has brought together on one new album on Glossa these works of Couperin’s full maturity, demonstrating the composer’s spiritual and mischievous tendencies in equal measure (as well as his own mastery of the subtleties of the gamba).

As well as the Plainte from the Tenth Concert Royal, there are two full Concerts from the collection entitled Les Goûts Réunis which ask for two violas da gamba. These are included alongside what may have been Couperin’s final works, the two sets of the Pièces de violes which, being supplied with a figured bass, call upon for the involvement of other instruments such as theorbo and harpsichord.

Considered by the booklet essay writer, Philippe Beaussant, to be ranked as one of Couperin’s masterpieces, the second Suite (which lay undiscovered for almost 250 years) contains an astonishing pair of pieces called Pompe funèbre (Couperin’s musical testament?) and La Chemise blanche.

Paolo Pandolfo is joined in this recording – made in the French village of Rasteau – by a second gamba player in Amélie Chemin, as well as by frequent collaborators from recent years in Thomas Boysen (theorbo, Baroque guitar) and Markus Hünninger (harpsichord).

Pandolfo is a master of the style; in slow movements barely a note passes without some subtle bowing nuance or full blown ornament… recorded sound is excellent.

It’s a stunning recording – music of the highest quality, played with, in turn, lyricism, virtuosity, and a new freedom, yet respect and insight into this most fastidious composer’s clear intentions in all his paraphernalia of bowings, phrasing marks and ornamentation. My record of the year.”

Paolo Pandolfo is a wonderfully rhetorical exponent of this beautiful repertoire. The Preludes are freely motivated and unhurried and his phrasing both idiomatic and expressively sensitive. A fine recital, which in addition features two ‘concerts’ for two bass viols from Couperin’s ‘Les Goûts réunis’.

Paolo Pandolfo is a wonderfully rhetorical exponent of this beautiful repertoire.