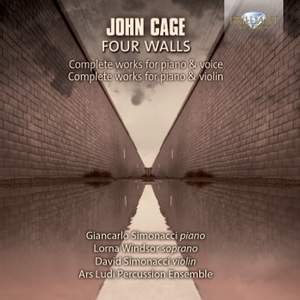 No. 1. Twenty years after

No. 3. At east and ingredients

Cage: She is Asleep

John Cage may still be known as avant-garde, a musical rebel, who greatly influenced music all over the world. But not all his music was written for prepared piano or consisted of electronic sounds. He also wrote several pieces for the ‘traditional’ combination of violin and piano. One CD of this album is devoted to this complete part of Cage’s output. He developed a keen interest in percussion, hence his prepared piano compositions. This lead to a number of unusual works, including one for voice and percussion. Such as the four dances for piano, voice and percussion. All of Cage’s songs are present here as well, with Three songs and Five songs on texts by E.E. Cummings and James Joyce. Cage was stimulated in his work by other disciplines of art.

Remarkable in this respect was his collaboration with choreographer Merce Cunningham. The composer travelled extensively with the Cunningham Dance Company. This lead to a couple of pieces of ballet music for a single piano (with one item for voice). Both Four walls and The Seasons are recorded here.