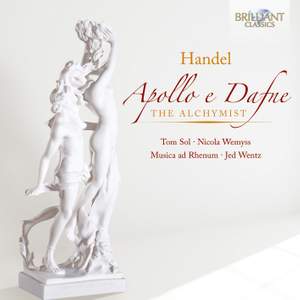 V. Aria: Felicissima quest'alma (Most fortunate is this soul) (Dafne)

XI. Aria: Come rosa in su la spina (Like the rose on its stem) (Apollo)

Apollo e Dafne is an early work of Handel’s, completed at the latest by 1710 when he was 25 years old in Hanover, whence Handel departed in 1710 after Agrippina had made such an impact in Venice. He thence decamped to London in the autumn of 1710, perhaps as a propagandist for the Hannoverian succession, and may even have had political duties to attend to in secret, while carrying on a spectacularly successful musical charm‐offensive in favour of George and Germany. If this is the case, then we could see the dance suite of music from The Alchymist (HWV43) as advanced publicity, carefully planned to prepare Handel’s arrival.

Whatever: both works here are the works of a youthful and exuberant outpouring of genius. They both were conceived in theatrical Catholic Italy, only to achieve their final form in the Protestant North. In this transformation process they seem to have lost none of their vigour and warmth; and today they charm us still as they must have charmed when new, like a whiff from distant lemon groves through the London fog and the rain. Jed Wentz and his consort Musica ad Rhenum are stalwarts of the extensive catalogue of historically informed recordings on Brilliant Classics. They draw on the rich performance and scholarly tradition of early music in The Netherlands, and their recordings of Bach, Handel, Couperin, Rameau and more have, since the group's foundation in 1992, won critical praise.

Contains notes on the music as well as artist biographies.