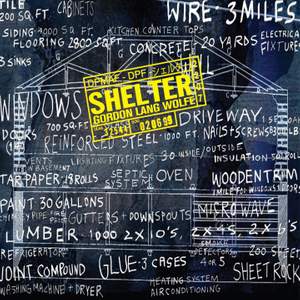 I Want to Live

Shelter is the product of an unusual three-way collaboration among Bang on a Can’s founding composers Michael Gordon, David Lang and Julia Wolfe. Scored for three sopranos and a 17-piece ensemble, the project explores and contrasts what the concept of “shelter” means in different cultures.

Ensemble Signal’s debut recording of Shelter, under the musical direction of Brad Lubman and produced by Michael Riesman, has a rich performance history. It was originally commissioned for The Next Wave Festival by the Brooklyn Academy of Music, musikFabrik and Kunstiftung NR, and premiered with Trio Mediaeval singing the three solo voices in Cologne, Germany, on March 20, 2005.

To form what The New York Times has called “one of the most vital groups of its kind,” Lubman and Radnofsky assembled a “new music dream team” (TimeOut NY) of independent artists who have worked closely with one another over the last decade. Members of JACK Quartet, Alarm Will Sound, and other leading New York groups perform regularly with Ensemble Signal. Flexible in size and instrumentation, the ensemble wrangles a diverse repertoire that ranges from Steve Reich to Helmut Lachenmann and beyond.