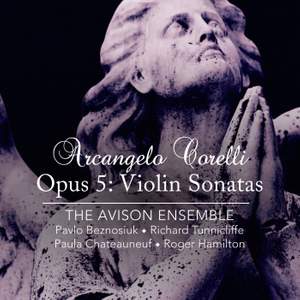 Corelli: Violin Sonata in B-Flat Major, Op. 5 No. 2 in B Flat Major

The Op. 5 collection consists of eleven sonatas; the twelfth, and most popular, work is a series of twenty three variations on the ‘Follia’ of which Corelli was especially proud.

Corelli’s contribution to the history of violin performance was immense. All six of his published collections of instrumental music demonstrate his exceptional skill as a violinist and composer, but it was in his Op. 5 Sonatas that Corelli had the most significant impact on violin technique.

Formed in 1985, the Ensemble has attracted great critical acclaim. The Guardian commented: ‘I’d take the Avison Ensemble over Karajan…any day’.

The Avison Ensemble comprises some of Europe's leading Baroque musicians, including artists from The Hague, Germany, France, Austria and London, with international soloists from all over the globe.

Pavlo Beznosiuk, the UK's foremost baroque violin virtuoso, is in demand as a soloist and orchestral leader performing regularly with the Academy of Ancient Music and Orchestra of the Age of Enlightenment.

Beznosiuk offers lyrical, intuitively musical performances, imbued with a placid, unpretentious grace, while his spontaneous ornamentation adds a dash of Baroque bravura. Beznosiuk is well matched by the outstanding continuo players...the quartet conversing with the ease and familiarity of old friends... The Linn recording is luminous and sensitively balanced

Beznosiuk plays with enormous affinity and charm,his fluent and imaginative ornamentation always within the bounds of the pulse and good taste. Having chosen not to ornament the repeats slavishly, he retains the power to surprise and delight us even to the last sonata.

The small additions to the two gavottes are stylish and it’s nice to hear the variations in the performance of the bass line...I found the Avison Ensemble’s recording of Corelli’s Op.6 revelatory in several respects