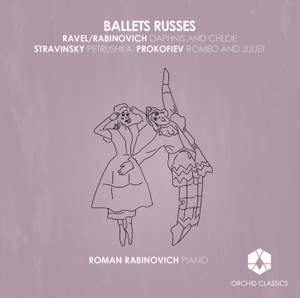 There is plenty of dazzling passagework to savour — BBC Music Magazine, October 2013, 4 out of 5 stars

No. 2. Scene: The Street Awakens

No. 3. Minuet: Arrival of the Guests

No. 9. Dance of the Girls with Lilies

No. 10. Romeo and Juliet before Parting

Roman Rabinovich fuses art and music on his debut Ballets Russes-inspired recording. An accomplished artist, Rabinovich regularly displays his iPad-created sketches alongside concert performances, and has created original artwork for this new release

Roman Rabinovich won the top prize at the 2008 Arthur Rubinstein International Piano Master Competition. At the age of 10 he made his debut with the Israel Philharmonic Orchestra under Zubin Mehta, and he has performed at venues including the Leipzig Gerwandhaus, Wigmore Hall, Metropolitan Museum NYC and Paris’ Salle Cortot

There is plenty of dazzling passagework to savour