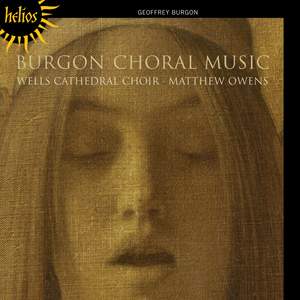 Burgon: At the round earth’s imagined corners

Burgon: Of flowers and emeralds sheen

I. As the angels stood

Burgon: The song of the creatures

Burgon: Death be not proud

Burgon: Come let us pity not the dead

The thirteen works recorded here range from the contemplative of the Nunc dimittis to the ceremonial of an anthem such as At the round earth’s imagined corners where the familiar Donne text receives a thoroughly fresh interpretation. This is music reaching out to a modern desire for immediate accessibility masking consummate artistry: ‘I can’t believe it’s not Rutter’, perhaps …

But commercial success should not prevent us from recognizing, and appreciating, a depth of invention and mastery of formal conception which might just as well be described as being firmly rooted in the classical tradition, and particularly that of the Anglican Church.

Musically, these performances are all that could be wished for in terms of technical accomplishment

Geoffrey Burgon … has found a niche in contemporary English choral music because he wants to communicate, to write music that people want o
hear… this immensely appealing music is superbly sung by the Wells Cathedral Choir who prove to have excellent soloists. The vivid direction by Matthew Owens is greatly aided by David Bednall’s creative organ contribution and Hyperion’s first-class recording in the cathedral. A disc well worth seeking out