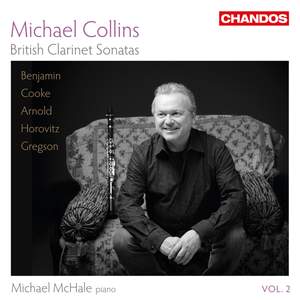 The strongest music on the programme turns out to be the first, where Collins's huge reserves of gorgeous-toned musicianship are rewarded in...Malcolm Arnold's sharp-focus, irreverently brilliant... — BBC Music Magazine, May 2013, 4 out of 5 stars More…

Cooke, A: Sonata in B flat for clarinet and piano

I. To Francis Poulenc (for Emma Johnson)

This is Volume 2 in the series ‘British Clarinet Sonatas’, in which Michael Collins is joined by the pianist Michael McHale. BBC Music awarded five stars to Volume 1, and wrote: ‘Collin’s clarinet-playing mesmerises the ear: the closing phrase of Stanford’s ‘Caoine’ movement shows what a player in this league can convey in just two quiet notes. Without snatching the limelight, Michael McHale’s accompanying finds a range of keyboard colours in, above all, the works by Ireland and Howells, making their individual sound-worlds seem unexpectedly subtle and rich.’ On this disc the pair turns to works for clarinet and piano by Arthur Benjamin, Edward Gregson, Joseph Horovitz, Sir Malcolm Arnold, and Arnold Cook.

Arthur Benjamin was Australian-born, but lived out much of his life in England. In its melodies, harmonies, and rhythms, his Le Tombeau de Ravel reflects a deep and long-standing admiration for the music of the French composer – the title itself pays tribute to Ravel’s Le Tombeau de Couperin. But whereas Ravel’s Tombeau consists of a prelude and several dances, Benjamin’s is a sequence of ‘Valse-caprices’, which has more in common with a different work by Ravel, the Valses nobles et sentimentales for piano and for orchestra.

Edward Gregson completed his five Tributes in 2010, having started the first of the set some twenty years earlier. Each of the Tributes is written as homage to one of five noted twentieth-century composers who wrote memorably for the clarinet in solo or chamber works. In his own words, Gregson ‘tried to invade the stylistic worlds’ of these composers – namely Poulenc, Finzi, Stravinsky, Messiaen, and Bartók – in much the same way that Arthur Benjamin had channelled Ravel in Le Tombeau de Ravel.

Joseph Horovitz was born in Vienna, but immigrated to England as a boy, and has lived in London for more than seventy years. His output includes operas, ballets, choral works, chamber music, several pieces for brass band, and of course this Sonatina for clarinet and piano, written in 1981 and first performed by Gervase de Peyer and Gwenneth Pryor at the Wigmore Hall, London later that year.

Also on this disc are Sir Malcolm Arnold’s Sonatina for clarinet and piano, written between 1948 and 1951 for the eminent British clarinettist Frederick Thurston, and Arnold Cooke’s Sonata of 1959. Cooke was a student of Paul Hindemith’s in Berlin, and this work is strongly inspired by Hindemith’s trademark compositional use of traditional tonal construction, and clear, cool contrapuntal textures.

The strongest music on the programme turns out to be the first, where Collins's huge reserves of gorgeous-toned musicianship are rewarded in...Malcolm Arnold's sharp-focus, irreverently brilliant three-movement tour de force...As in Vol. 1 of the series, Collins's lustrous expertise is fully in evidence, as is Michael McHale's top-flight accompanying.

This is a delightful disc, not just through the warmth and fun of the five works by five composers, but through the magic of the great clarinettist Michael Collins

Collins and McHale have a special affinity for these attractive British chamber music scores. Collins’ exquisite playing is crisp and evinces sure articulation, refined phrasing and agreeable intonation. McHale is sensitive and supportive. Both players radiate pleasurable music-making.