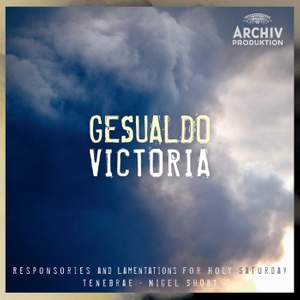 this is the Tenebrae ensemble singing the Responsories associated with the Tenebrae period. There have been several fine recordings of these items...but this one excels, partly because it gets... — BBC Music Magazine, May 2013, 5 out of 5 stars More…

2013 marks the 400th anniversary of Gesualdo’s death. One of the most visionary composers of his time, he wrote the Tenebrae Responsories for Easter Week, and his anniversary year offers the opportunity to further explore his music, and his fascinating story, with fresh eyes and ears.

The works for Holy Saturday, featured here, remain a cornerstone of his extraordinary oeuvre.

A game-changing, risk-taking approach to composition, combined with a tortured personal life, makes Gesualdo one of the most fascinating composers in history.

The companion work to the Responsories is a set of Lamentations by Tomás Luis de Victoria, a contemporary of Gesualdo.

Tenebrae is widely considered to be one of the finest choirs in the world, having garnered praise for their numerous award-winning recordings. Most recently, they won the BBC Music Magazine 2012 Award for “Best Choral Group”

this is the Tenebrae ensemble singing the Responsories associated with the Tenebrae period. There have been several fine recordings of these items...but this one excels, partly because it gets exactly right the balance between the mannered, madrigalesque features of the music and the eerie drama and morbidity of the religious story.

Tenebrae's fondness for a monumental sound, achieved with a comparatively small number of singers, is part of a noticeable development of recent years. It certainly focuses the ear on dramatic shaping...From that standpoint, their choice of Gesualdo's Tenebrae Responsories for Holy Saturday plays to their strengths.

If perfection is attainable (which I doubt), we get very close to it here...while these singers revel in the elegance and logic of Victoria, they positively glow in the dramatic and arresting idioms of Gesualdo, whose music, over four centuries on, still has the power to shock and amaze.

The performances and recording ambience here are irreproachable. Tenebrae produce a sound not dissimilar to that of The Sixteen and employ much the same forces of usually three voices per part...Tenebrae have a more mellow sound and thus achieve a better internal balance amongst the four lines...A superb disc

Tenebrae's faultless control and balance bring the sacred texts to life [in the Gesualdo], including some wild modulations and sudden side-slips...[in the Victoria] the 16 singers of Tenebrae under Nigel Short's direction shine in the darkness.