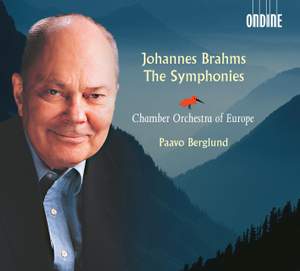 This special 3 CD-box features the four Symphonies by Johannes Brahms, performed by the Chamber Orchestra of Europe, under Paavo Berglund.

Paavo Berglund (1929–2012) is considered to be one of the most acclaimed Finnish conductors of the last few decades. This highly praised symphony cycle is re-released in honour of his memory.

The Chamber Orchestra of Europe, hailed as one of the finest ensembles in the world, has released over 100 recordings with the world’s leading conductors and soloists, winning several prestigious awards.

Present day performances of Brahms symphonies with smaller string forces are rare, but there is evidence that the size of orchestra in Brahms’s time was not fixed and, indeed, Brahms’s own orchestra in Meiningen performed his fourth symphony with almost the same forces as are used on this recording.