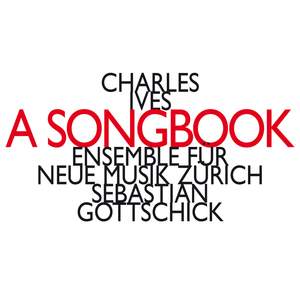 Creative decisions have been taken about where to place Ives's songs in relation to each other, this new concept designed to illuminate our understanding of the time and place that begat them...both... — Gramophone Magazine, May 2013 More…

Ives, C: Intermezzo: Scherzo: All the Way Around And Back

Ives, C: The Housatonic at Stockbridge

Ives, C: At the river

Ives, C: Intermezzo: In the Night

"Sebastian Gottschick’s adaptations of Ives’ songs and short instrumental pieces in this sense not only pay homage to the composer but develop his work further. The multifaceted ensemble and the instrumentation Gottschick chose allow him to be highly differentiated in his approach to the specific Ives sound that oscillates between crude realism and symbolist fragmentation: he either deliberately avoids this sound (for instance by using a vibraphone in Grantchester) or he pushes it to the point of prismatic refraction. Apart from this, Gottschick’s selection proceeds in a continuous, multi-perspective order that can be interpreted as a drama en miniature, a model of an ordinary day from the snatches of dreams in the morning to the falling night, and finally also as the epitome of the diversity of life itself. Behind all that the power and intangible nature of memories, Ives’ lifelong theme, becomes visible and audible." Wolfgang Rathert

Creative decisions have been taken about where to place Ives's songs in relation to each other, this new concept designed to illuminate our understanding of the time and place that begat them...both singers are...sympathetic and technically bulletproof