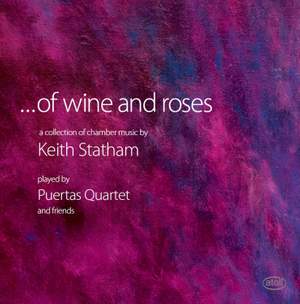 ….of wine and roses

A Collection of Chamber Music by Keith Statham

Born in Gloucester, U.K., Keith Statham studied Music at school and Cambridge University, and worked in the recording industry for Decca and Phillips before becoming General Manager of the Northern Sinfonia Orchestra from 1966-74. He has also spent five years as freelance composer/arranger before becoming Director of the Hong Kong Arts Festival from 1980 – 1987. The Puertas Quartet was formed in London in 2009. The quartet toured in 2011 with various programmes that included the Romance No.1, which is featured on this world premiere CD.