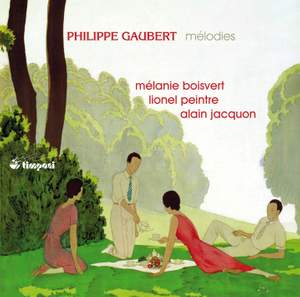 No. 3. Voici les plus doux soirs

Timpani has already released three volumes devoted to the orchestral works, including several world premiere recordings. This great conductor was well-known also as a born orchestrator. And his works for the flute need no introduction.

He is less well-known as a composer of songs. This is, however, to forget that throughout his life Gaubert composed for the voice, leaving more than 90 such works! The performers have chosen more than thirty, alternating vocal ranges and reflecting the composer’s preferences with regard to poets: Verlaine, Derème, Baudelaire, and above all Paul Fort (3 volumes and a few other songs).

Should this astonish us? There is in Gaubert a straightforwardness, a hatred of convoluted sophistication, and this ties him to the ‘prince of poets’. Lionel Peintre has collaborated with Timpani for some twenty years (Cras, Caplet, Emmanuel, Pierné, Dupont and others); Mélanie Boisvert was Nicolette in the Aucassin et Nicolette produced by Timpani a year ago; as for Alain Jacquon, he is a longstanding regular of the label, with his incomparable mastery and innate sense of vocal enhancement.