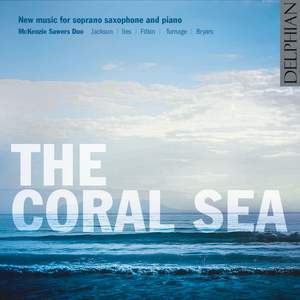 A Robert Mapplethorpe photograph and the playing style of Busoni’s favourite clarinettist - just two of the inspirations behind these six recent British works for saxophone and piano, which are linked by the composers’ relationship to popular music, whether oblique, overt, or antagonistic.

From the pounding muscularity of Graham Fitkin to the blues-drenched melancholy of Mark-Anthony Turnage, Edinburgh duo Sue McKenzie and Ingrid Sawers bring stylistic authority and idiomatic flair to everything they play on this, their debut recording.

Sue McKenzie is a past winner of the British Clarinet and Saxophone Society Young Performers Competition. As one of Scotland's leading contemporary saxophonists she has given UK and Scottish premieres of many new works for saxophone, including those from Gavin Bryars, Graham Fitkin and Amy Quate. Susan is also the leader of the Scottish Saxophone Ensemble and was an Assistant Director of the World Saxophone Congress in 2012.

Ingrid Sawers is in demand as one of Scotland's finest accompanists and chamber musicians, performing in venues including the Usher Hall, Glamis Castle and Scone Palace, as well as widely throughout the UK and abroad.

an agreeable collection of works … a strong roster of composers

a varied, enjoyable CD of six recent works by British composers...The instrument's jazz heritage is ever present, from the bluesy rhetoric of Jackson's title piece to the sad poetry of Turnage's Two Memorials.