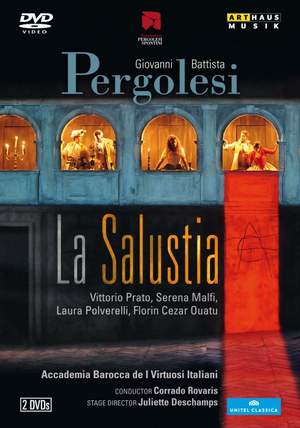 Pergolesi’s first opera “La Salustia” is filled with emotions and dramatic elements. It portrays the battle of two women, their struggle for power and justice. Further, it is the story of failing deceitful plots and mistrust.

Salustia is the strong empress, wife of the Roman emperor Alessandro, whose mother-in-law Giulia would rather see dead than accept as ruler. Strangely however, it is Salustia who saves Giulia from her own death more than once. She fights not only for her own justice – ruling together with her love Alessandro – but also for justice amongst all the other battling parties. At the end she is rewarded for her moral strength. The drama around the unbreakable Salustia takes its course in the setting of ancient Rome. Young French director Juliette Deschamps, known for various opera productions in Jesi, made the old story come alive on a stage that suggests an ancient palace with large windows, later on the coliseum. The cast features well-loved Pergolesi interpreters such as Serena Malfi, Laura Polverelli or Vittorio Prato. The Accademia Barocca de I Musici Italiani, well-known for productions in historic performance practice, are led by Corrado Rovaris. This is a world premiere recording of one of the very few Salustia-productions that exist worldwide.

[Salustia] is thoroughly likeable in the hands of mezzo Serena Malfi. Her light young tones exude innocent shock at her situation...but she mines Pergolesi's music for all the emotional gravitas she can muster...The strong case here is matched by meticulous period playing and calm direction

The singing and playing of La Salustia are both expert and enthusiastic...This work stands as an enjoyable example of Pergolesi's art and of both stylish and virtuoso singing.