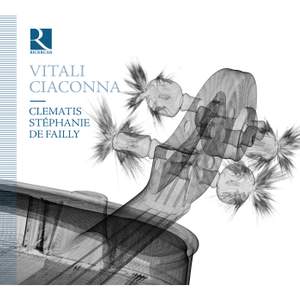 Every violinist from the Romantic period onwards has played Tomaso Antonio Vitali’s famous Chaconne, although the score that they used was always based on the very much modified version of the piece that violin virtuoso Ferdinand David had made of it around 1860. Various unusual aspects of the piece together with some unexpected modulations have always led experts on the Baroque to regard the piece as inauthentic. Stéphanie de Failly, however, has gone back to the original manuscript and in so doing has not only shed new light on the work but also revealed its connections to other works by Tomaso Antonio Vitali and his father Giovanni Battista Vitali. The musical invention in Giovanni Battista’s pieces and dances with variations leads the listener directly to the extravagances of the Chaconne.