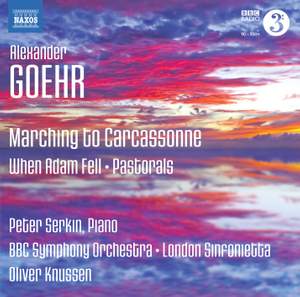 Alexander Goehr is a central fi gure of the post-war Manchester School of composers with Birtwistle and Maxwell Davies. His work is recognized today for its assimilation of intellectual rigour with transparent expressiveness and richly haunting sonorities. This programme ranges from the Gabrieli-inspired virtuoso brass of Pastorals and the labyrinthine structures of Marching to Carcassonne, to When Adam Fell, with its extraordinary descending intervals discovered in Bach. Alexander Goehr’s close association with Oliver Knussen and the musicians on this recording make these performances uniquely authoritative.

This programme of music by Alexander Goehr is of works unavailable elsewhere on recordings. We have had huge success with our reissues of recordings by Goehr’s Manchester School colleague Sir Peter Maxwell Davies, and this release is also something of a coup for Naxos, including as it does Goehr’s most recent orchestral piece When Adam Fell. With Goehr’s relative recent mainstream neglect this release seeks to help reposition his work as a core element in European contemporary music.

Goehr's abrupt sometimes taken a few listens to grasp, but its lean textures and evocative instrumental colours are ideal for Oliver Knussen's meticulous ear for delight and delight in sonority. Himself the dedicatee of When Adam Fell, Knussen brings out the music's sparkle and lively character.

Gabrieli’s antiphonal brass writing becomes the overt influence [in
Pastorals] as the arrestingly nuggety score proceeds. When Adam Fell
is a scholastically inspired orchestral treatment of a Bach-chorale
bass line, Marching to Carcassonne (2002) a complex hybrid for piano
and 12 instruments, glorying in a skewed neoclassicism

this collection of previously unrecorded works makes a valuable late 80th-birthday tribute to Alexander Goehr...The performances under Knussen, with Peter Serkin as soloist in the Carcassone piece, could not be bettered, but on disc both seem as hard to pin down as they did in the concert hall.