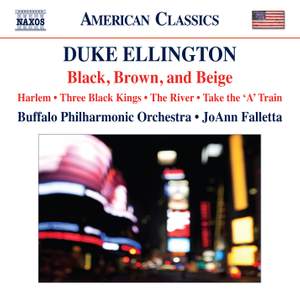 this new set of Ellington compositions by JoAnn Falletta and the Buffalo Philharmonic shows the ducal legacy right at home in the concert hall...The Buffalo forces deliver his portrait of Harlem... — BBC Music Magazine, July 2013, 4 out of 5 stars More…

Edward Kennedy ‘Duke’ Ellington wrote some of the twentieth century’s greatest Big Band music, but he also wrote in a variety of forms. The boisterous and evocative Harlem pays tribute to Ellington’s roots, Black, Brown, and Beige sets work songs and spirituals, whilst the suite from The River shows his genius in writing for the stage. Three Black Kings, scored as a ballet, was left unfi nished at his death, but shows no lessening of invention. Ellington’s arrangement of Billy Strayhorn’s Take the ‘A’ Train became famous around the world after the outbreak of World War II, and ranks among the most widely recorded standards of all time.

Duke Ellington’s suites were written for a variety of reasons. The master of Big Band jazz was also a master of tone poems such as the boisterous and evocative Harlem and the African-American-celebrating Black, Brown and Beige. Each piece reflects a facet of his genius, from the early maturity of Harlem to his late, uncompleted Three Black Kings.

this new set of Ellington compositions by JoAnn Falletta and the Buffalo Philharmonic shows the ducal legacy right at home in the concert hall...The Buffalo forces deliver his portrait of Harlem with bounce and brio

A vital and very generous collection showcasing a concert Ellington who loved his commercial roots yet had more to give and gave it.