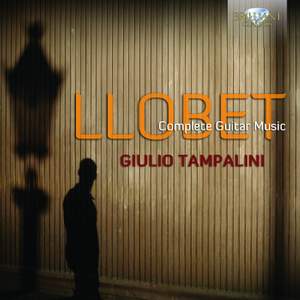 This new recording presents the complete guitar works of Llobet, who himself was a virtuoso on his instrument, as shown in the complex and innovative writing. Barcelona-born Miguel Llobet once played for the Spanish royal family in the early 20th century. Credited with beginning the notion of a touring classical guitarist, Llobet travelled throughout Europe and beyond, briefly settling in both Paris and Buenos Aires. He later returned to Barcelona, unable to distance himself from his birthplace despite the grip of the civil war in which the city found itself.

This collection brings together Llobet's complete works for guitar, beginning with Leonesa and his popular arrangements of 13 Catalan folk songs. These arrangements, each of a varying character, wring a different emotion from the guitar, from the sprightly L'Hereu Riera and lilting El Noi de la Mare to the flourishes of Cançó de Lladre and the mournful El Testament d'Amelia. The Variations on a Theme of Sor, based on Fernando Sor's B minor study, contrast a haunting melody with complex articulation. Also featured on the disc are Llobet's 5 Preludes, the Argentinian Folk Songs, Etudes, the witty and bright Scherzo-Waltz, and the composer's debut composition Romance, among others.

Italian guitarist Giulio Tampalini studied at the Luca Marenzio Conservatory in Brescia and the G.F. Ghedini Conservatory in Cuneo, and has attended masterclasses all over the world with performers such as Tilman Hoppstock, Eliot Fisk and Dusan Bogdanovic. He has won awards at many international competitions and has performed with orchestras across Europe, America and Asia, including the Andalusian Symphony Orchestra, the European Soloists of Luxembourg, and Pittsburgh's Point Chamber Orchestra.

The works of Spanish composer Miguel Llobet (1878-1838) have to be seen in the light of his own tragic life, which after glorious periods in the highest artistic circles of Paris at the beginning of the 20th century, ended in depression and gloom in Barcelona in the dismal circumstances caused by the Spanish Civil War. His music eschews the artificial quasi-Spanish-folklore elements, but is firmly rooted in the Spanish culture, albeit of a deeper and darker character, and injected with 20th century modernist elements.

Excellent performances by Giulio Tampalini, one of Italy's leading guitarists.

Contains superb liner notes by Angelo Gilardino and a biography of the artist.