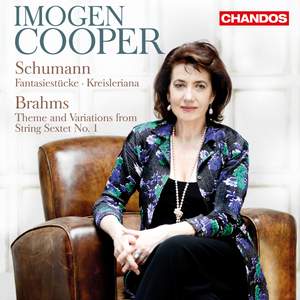 This is Volume 1 in Imogen Cooper’s new series on Chandos Records, dedicated to the complete works for piano by Robert Schumann. Recognised worldwide as a pianist of virtuosity and poetic poise, Imogen Cooper has established a reputation as one of the finest interpreters of the classical and romantic repertoire. She has dazzled audiences and orchestras throughout her distinguished career, bringing to the concert platform a unique musical understanding and lyrical quality.

‘Duality, intermingling and juxtaposing identities, the dream world, the subconscious, wild humour, the supernatural, disguise, the outsider’. These are all words used by Imogen Cooper to describe the inner world of Robert Schumann. On this recording, she offers her interpretations of two works by this deeply inspired composer: Fantasiestücke and Kreisleriana. Both display in full Schumann’s extraordinary ability to express the gamut of human emotions in a highly imaginative language that draws the best from both piano and performer.

Schumann dedicated his Fantasiestücke to a young Scottish pianist by the name of Roberta Laidlaw, with whom he had a close, if brief, relationship during his eighteen-month-long separation from Clara Wieck, whom he was patiently courting. In one of the most important early studies of Schumann’s music, published in the journal Neue Zeitschrift für Musik, Franz Brendel compared this work to ‘a landscape painting in which the foreground gains prominence in sharply delineated, clear contours while the background becomes blurred and vanishes in a limitless perspective’.

Kreisleriana was inspired by a complex character created by the writer E.T.A Hoffmann: Kapellmeister Johannes Kreisler. In reflecting the complex personality of Kreisler, Schumann’s Kreisleriana seems to take on the very same alternating characteristics that are ascribed to this character. At times the music comes across as wild, eccentric, and clever, at others it displays a mood that is truly tender, lyrical, and romantic.

The last work on this disc is the solo piano arrangement which Johannes Brahms made of the Theme and Variations movement from his String Sextet, Op. 18, and dedicated to Clara Schumann. She received the manuscript of this arrangement on her forty-first birthday, 13 September 1860. She was delighted to be able to play the variations herself, as she wrote in a letter to Brahms three days later. Nonetheless, the first public performance did not take place until a concert in Frankfurt on 31 October 1865.

Throughout this superlative recital, Imogen Cooper's artistic sensibility - highly personal, interpretatively penetrating, yet never didactic - reflects a sympathy with the music so intimate and compelling that it seems for the most part to transcend the very concept of interpretation...for me, the highpoint of this marvellous release is her playing of the Brahms transcription...Forget that old canard that Brahms is 'thick'. The sound here is positively luminous.

[in Op. 12] she relishes the haunting ebb and flow of 'Des Abends' and finds her way to the very heart of the composer in the delectably pointed romantic polyphony in the central section of 'In der Nacht'...the steadiness provides an always musicianly alternative to speed or hysteria...you remain grateful for the way Cooper tempers Schumann's hallucinatory art with her own more basic and fundamental musicianship

Cooper manages to capture just the right mood [in the Brahms Variations], emphasizing the dark hues. Her playing has great virtuosity and is highly polished.

[Cooper] proves a wonderfully tactful and sympathetic guide to the boundless imagination of the piano writing. Other pianists may make this music sound more virtuosic or more winsome, but she projects the emotional turbulence of the fifth of the Fantasiestücke without making it overwrought