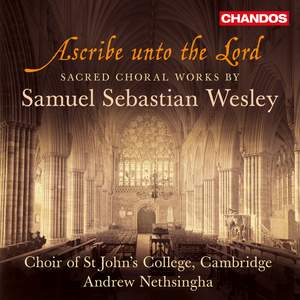 Offer, Ascribe unto the Lord

Wesley, S S: Wash me throughly from my wickedness

Ascribe unto the Lord

O worship the Lord in the beauty of holiness

As for the gods of the heathen

The Lord hath been mindful of us

The wilderness and the solitary place

Say to them of a fearful heart

Then shall the lame man

And the ransomed of the Lord

And sorrow and sighing

3 Pieces for a Chamber Organ, Book 2: No. 2. Larghetto in F sharp minor

Wesley, S S: O give thanks unto the Lord

O give thanks unto the Lord

Who can express the noble acts of the Lord

Blessed are they that alway keep judgment

Wesley, S S: O Thou who camest from above (Hereford)

The Choir of St John’s College, Cambridge has selected some of the best-known choral works of Samuel Sebastian Wesley for inclusion on this disc, interspersing them with one of his organ works as well as a psalm chant by his father, Samuel Wesley.

Samuel Sebastian Wesley was one of the most controversial characters in nineteenth-century English music, earning a reputation for inherent stubbornness, a highly critical mindset (particularly in relation to the church), and a unique pioneering spirit. All of which were character traits which became instrumental in the creation of the wholly new styles of church music, and the renewal of church practices, for which he became known.

‘The Wilderness and the Solitary Place’ (c. 1832) is one such work, described by the conservative critic R.J.S. Stevens as ‘a clever thing. But it is not cathedral music’. This early work comes across as a compressed oratorio, or an operatic scena, with the overt emotions and huge range of textures on display unlike anything that had ever been heard in English church music before. In contrast, the mature ‘Thou wilt keep him in perfect peace’ (c. 1850) shows the distance that Wesley had travelled since his earlier works on this disc. It is a model of simplicity and restraint, with a devotional close very much in the manner of Orlando Gibbons or William Byrd.

The Choir of St John’s College, Cambridge is one of the finest collegiate choirs in the world, known and loved by millions for its recordings, broadcasts, and concert tours. For several decades it has performed around the world, including the US, Canada, Brazil, South Africa, Japan, Australia, and of course Europe. It is also the only British choir to webcast services weekly throughout the year, at www.sjcchoir.co.uk.

an attractive programme, sung with expertise and devotion

One of the best [canticle-settings] is Wesley in E...Nethsinga directs splendidly, the performance as broad and grand as one could wish...this is a disc to uplift the spirits.